Most industry observers believe the leaders of increasingly complex development projects must combine subject matter expertise with strong executive skills—a rare combination. Do the leaders we are searching for exist?

One of the most important factors in whether a donor delivers on its objectives is not one likely to come up in conversations about aid effectiveness. The policies and decisions surrounding what type of person gets hired to manage donor-funded development activities—a technical expert versus a strong manager—may not be as glamorous as getting value for money, promoting innovation, or weighing the political economy. But at ground level, there is nothing more important.

The U.S. Agency for International Development (USAID), the U.K. Department for International Development, and others have long relied on technical experts to manage development projects. In seeking out project managers—chiefs of party (COPs) or team leaders—it’s not unusual for a donor to ask for decades of experience in a narrowly defined technical area. The system arguably worked well when projects were smaller and more narrowly focused but has not adjusted for the transformation in how aid is delivered.

“Successful COPs are a rare breed and they are constantly sought after.” - Wade Channell, Senior Advisor at USAID

Aid from donors is often described in terms of flows. It’s actually delivered in bits and pieces—checks to governments, short-term advisory work, or long-term projects run by outside organizations. Since 1997, spending by the world’s wealthiest donors has skyrocketed from nearly $71 billion to almost $135 billion in 2013 even as staffing levels have at best been maintained or in some cases cut. As a result, donors have spent more money through longer-term projects that have become larger and more technically diverse and demanding.

Hiring policies have not evolved at the same pace. The tension is reflected in a survey of Guardian Global Development Professional Network members to gauge whether there is a preference in the industry for strong technical specialists or strong managers. Fully 80 percent of respondents couldn’t choose between the two, answering that a leader must combine technical and managerial strengths. The problem? A majority of respondents also said it was somewhat rare (49 percent) or very rare (7 percent) to find these traits in one person. 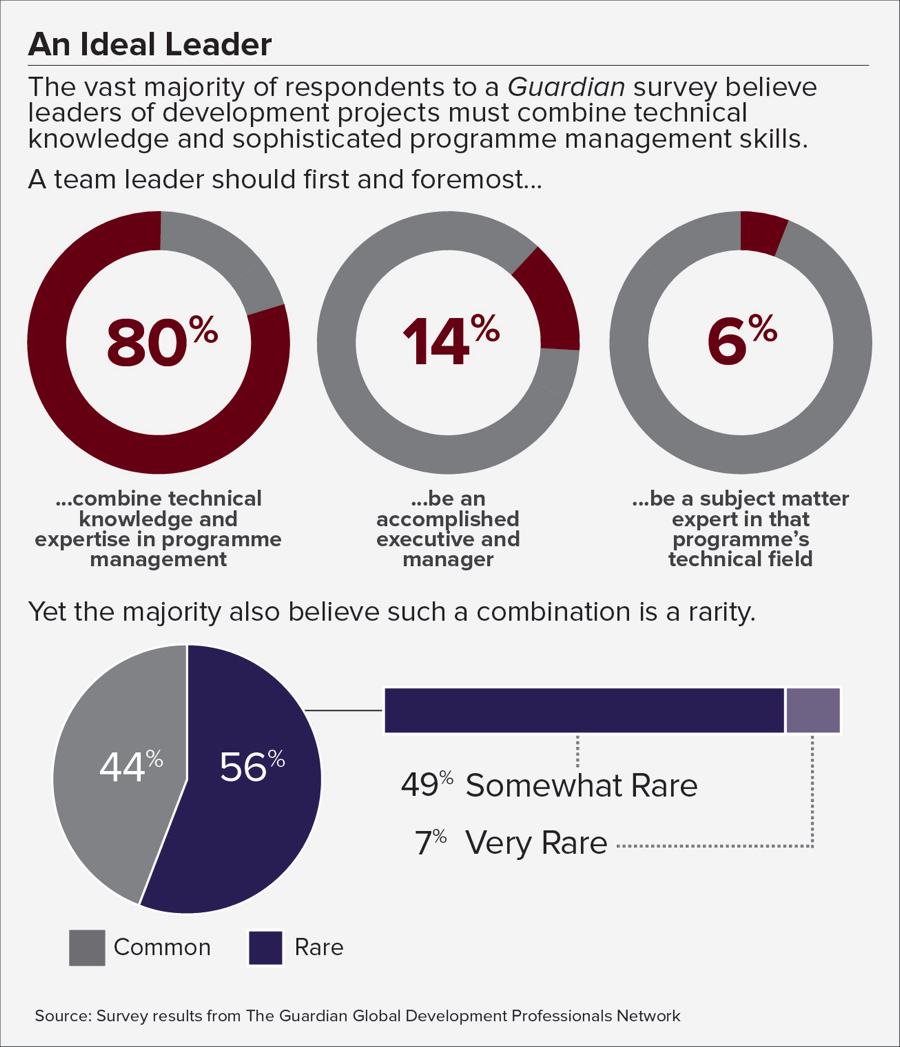 “Successful COPs are a rare breed and they are constantly sought after,” confirms Wade Channell, who has struggled with the issue from the side of the implementer and the donor, most recently as a Senior Advisor at USAID. Channell, speaking in a personal capacity, can count on one hand the COPs he thinks masterfully blend the technical and managerial aspects of project delivery.

The dearth of these skills says more about the selection process than the quality of talent in development. The development industry is the real-life version of revenge of the nerds. Donors seek out gurus and supporting organizations try to breed them. “People who are technically good at their job get promoted and promoted and promoted,” says Ann Hudock, a Senior Vice President at Plan International. “One day they reach the pinnacle of their career. They are asked to run a project. But they are utterly unprepared.

“People flop in spectacular ways sometimes and people wonder why,” says Hudock, who believes the creative and experimental thinking required to be a strong technical expert does not naturally translate into strong management skills. Her view is that organizations need to invest earlier to build management skills in their technical ranks.

The World Bank appears to be adopting that approach. One of the main drivers of its ongoing reorganization is to improve management skills among staff, according to Sean McGrath, VP of Human Resources. “Like most public systems, historically we’ve invested in our technical capabilities,” McGrath told the Financial Times. “We haven’t given equal investment to people’s role as managers – and as junior managers.”

Other industries seem to have caught on to this earlier. In 2011, Google – the quintessential “technical” firm – took an extensive look at the eight traits that make managers successful. Being a technical expert was “absolutely the least important thing,” according to Laszlo Bock, Google’s SVP for People Operations, compared to some management basics: being accessible, avoiding micromanagement, focusing on results.

Channell argues that 80 percent of a team leader’s success is driven by the ability to “play well with others.” That may be harder than it sounds when a team leader must balance the priorities of a donor client, a beneficiary government, and the project team itself. But the bottom line is that technical knowledge at the top of the team is not likely to be the principal determinant of a project’s success, he says, when technical issues usually occupy only a fraction of a team leader’s management bandwidth.

Implementing organizations with extensive back-office support systems can sometimes provide cover for technically rather than managerially oriented team leaders. And donors have started giving implementers more leeway in how they construct management teams—bringing on a strong manager as deputy, for instance. But job specs for the typical team lead still tend to lean on a common attribute: tenure.

“We often require too much gray hair,” says Channell, who first became interested in development when the legal office he worked at in the mid-1990s received a fax from a company looking for a legal expert who was willing to live in one of the world’s poorest countries, Guinea-Bissau. “Had they been looking for a Catholic theologian, the Pope would not have qualified,” he says.

As if finding the perfect candidate to juggle technical and management responsibilities wasn’t hard enough, senior recruiter Joan Lott adds another criterion: country experience. Yet she is less pessimistic about the ability to find well-balanced leaders. Technical experts are like artisans—“almost to the extreme”—but there is no reason to doubt their ability to learn how to manage people, client relationships, and budgets, says Lott, who has directed recruitment for organizations such as Global Communities, Cardno Emerging Markets, and DAI. “A lot of them aren’t interested but they’re smart people so they can absorb this…You’re never going to find the perfect combination, but you need the technical dimension.”

Channell also sees a vital role for donors to play in broadening the pool of candidates. He believes donors could take more risks in finding the next generation of project managers by lowering the bar from, say, 20 or 25 years to 10 years on a project in lead roles. He also believes the procurement process could be less self-selective toward people who are not tied down by commitments. The unpredictable timeframe for awarding projects can be disruptive—even prohibitive—for talented people who don’t happen to be single.

While Channell views technical expertise as a vital trait for a team leader, he assigns it less importance as project scale rises into the tens and hundreds of millions of dollars. “You’d better have a manager,” he says. “Otherwise it’s going to eat them alive.”