Forests and climate change have never been more closely entwined in global climate policy discussions, and for good reason: the more forest, the less climate disruption. Reducing Emissions from Deforestation and Degradation + Conservation (REDD+) initiatives aim to reward communities in and around forests for not converting forests to other land uses, and millions of dollars have been invested to this end. Done well, REDD+ projects can reduce greenhouse gas (GHG) emissions from the clearing or burning of forests, promote development in communities around forests, strengthen land tenure, conserve carbon-storing forests, and safeguard biodiversity. Done poorly, these projects can increase emissions through meaningless offsets, boost deforestation in adjacent areas, and displace indigenous people.

This article outlines various REDD+ approaches and sketches a “community clearinghouse” concept that would match forest communities with the most fair and appropriate REDD+ opportunities.

REDD+ And The United Nations

Under the 1997 Kyoto Protocol to the United Nations Framework Convention on Climate Change (UNFCCC), nearly all of the world’s countries agreed to address GHG emissions. But REDD+ was only first discussed in 2005, and, as yet, no binding legal regime exists to govern REDD+ transactions internationally. Instead, different approaches have evolved:

The national fund approach: This approach lies outside carbon markets and is similar to an overseas development assistance model. Brazil’s Amazon Fund, for example, raises donor funds for non-reimbursable investments to prevent, monitor, and combat deforestation and promote sustainable forest uses in the Amazon Biome. It supports public forests and protected areas, sustainable production activities (timber and non-timber), and related science and technology. 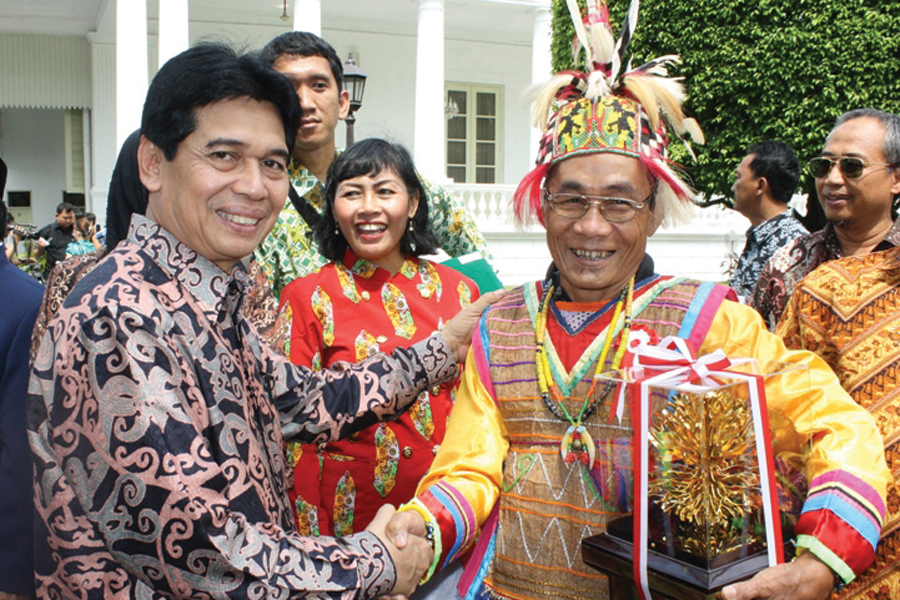 By not commoditizing carbon, this approach avoids the pitfalls of poorly designed carbon-market projects. But since action is taken at such a high level, it is difficult to determine the resulting local GHG reductions. A national fund also depends upon the goodwill of donors, and given competing demands for development funding, it is hard to see how national REDD+ funds could depend upon sustained external support.

The project-level approach: Under this approach, yet to be formalized within the UNFCCC, developing countries that act to reduce GHG emissions from forests can receive reduction credits through the UNFCCC, which could then be sold to developed countries to help them meet their post-Kyoto obligations. This approach is supported by approximately 40 countries in the Coalition of Rainforest Nations.

Most REDD+ transactions in the voluntary private market follow this project model, using protocols such as the Voluntary Carbon Standard to guide project design, sometimes in combination with additional community and biodiversity goals. This approach tightly links actions taken and carbon credits generated. But the commoditization of carbon, if poorly implemented, can lead to perverse economic incentives and harm forest communities.

The nested or hybrid approach: This approach, where “nested” projects within the same jurisdiction operate under the same GHG accounting rules, combines the state-level oversight of a model such as Brazil’s with the GHG accounting rigor of private projects. The nonprofit American Carbon Registry (ACR), for example, has published a nested REDD+ standard that provides guidance on how to register carbon benefits. The advantage is scale, predictability, and reduced project transaction costs. However, external support is often required to establish rules for jurisdictions such as provinces or countries.

The raw logic behind REDD+ dictates that since a ton of GHG avoided has the same global climate change impact regardless of where it is emitted, a rational actor would seek to abate that ton at the lowest cost. As such, an emitting party seeking to gain credit could simply pay forest communities more to maintain carbon in forests than they would otherwise earn from carbon-emitting land use.

This logic falters when it meets the reality of the complex drivers of deforestation, GHG accounting challenges, land tenure, and legal and cultural realities. Deforestation is driven by a complex interplay of local, national, regional, and global dynamics, and it is unclear how a new mechanism such as REDD+ can fix a problem decades in the making. Changing land use is always politically and socially charged, particularly when there are historical injustices at play. The trick for REDD+ projects is to meet the fundamental goal of reducing GHG emissions through conservation in a way that does not harm—or better, actually benefits—forest communities.

REDD+ projects are often located where forest communities face socioeconomic challenges and land tenure is contested and multifaceted. The commoditization of carbon has added a new value to land and incentivized socially powerful groups to wrest REDD+ benefits from indigenous people. Recent setbacks include Panama’s Indigenous Peoples Coordinating Body’s withdrawal from the UN-REDD process; they claimed it did not prioritize indigenous land rights. Similarly, the Inter-Ethnic Association for the Development of the Peruvian Amazon recently criticized the Forest Investment Program, accusing it of marginalizing indigenous people, promoting plantations, and logging illegally.

Addressing the social context of REDD+ is challenging but here, too, efforts have been made. The Climate, Community and Biodiversity Standards (CCB) promote pro-poor activities and economic benefits to forest communities, advocating that projects must identify the most vulnerable populations in project areas and benefit them.

Lessons From The Field

Under its Property Rights and Resource Governance Project and Promoting Transformations by Linking Nature, Wealth and Power Program (TransLinks), the U.S. Agency for International Development (USAID) recently published case studies of REDD+ projects. What emerged is that project-level REDD+ activities are in a “learning-by-doing” phase. The rights to benefit from land, trees and carbon, and—even more importantly—the implementation of these rights, vary greatly by project and country.

On balance, devolving tenure rights to the local level has proven beneficial in terms of emissions and social issues. Creating institutional mechanisms that ensure that other government and private stakeholders incur both costs and benefits is also critical. While formal land tenure is not necessarily a precondition for a successful project, it can often itself become an enduring benefit to forest communities. Similar to other actions that mitigate GHG emissions, such as reducing emissions from coal-fired utilities, and bring benefits such as lowered respiratory illnesses, REDD+ should be seen as an emerging land-use mitigation measure with its own benefits. USAID’s studies show that land tenure itself can bring social stability to impoverished communities.

DAI can attest to these findings from REDD+ activities in Haiti, Malawi, the Democratic Republic of the Congo, and Honduras. For example, the Orangutan Conservation Services Program, led by DAI from 2007 to 2010 in Indonesia, using the CCB standard prevented 53,000 hectares of Sungai Putri peat swamp forest from being converted to oil palm plantations. Beyond the GHG benefits, this project generated income for communities, reduced peat fires, and rebuilt orangutan habitat.

While protocols such as the CCB made great strides to incorporate social concerns into REDD+ projects, more can be done to fully incorporate forest communities as equal partners. The current model typically involves an external project developer approaching a community with a mostly pre-planned REDD+ project and then taking the resulting credits to market. This model, at best, can obtain informed consent from and create social and economic benefits for the communities. While vastly preferable to models that marginalize communities, it is hard to see how forest communities can be equal partners in a project proposed and marketed to them by financially interested outside parties.

To ensure their rights are fully safeguarded, forest communities need a neutral, intermediary institution between them and project developers. Under the hybrid approach described above, an objective REDD+ clearinghouse could be created within a jurisdiction that would link a forest community to a portfolio of proposed projects. It could also act as a neutral ombudsman to negotiate and arbitrate between the community and project developers.

Staffing the clearinghouse would be specialists with knowledge of indigenous languages, backed by a board of experts in law, land tenure, forest ecology, and finance. This board could be staffed by nationals and, when needed, experts from international organizations. Under this concept, developers would submit project proposals to the clearinghouse, which would pre-screen them according to the standards of the jurisdiction, reach out to community leaders, and provide independent and neutral information on the general REDD+ process. Community leaders could then select from pre-screened projects and be connected to the developers. The clearinghouse ombudsman could accompany the negotiation process between the community and developer, ensuring that modifications were consistent with the jurisdiction’s standards.

The clearinghouse would first be funded by donor and government funds and then supported by fixed or graduated fees charged to project developers. This model could systematize REDD+ and absorb much of the transaction cost associated with individually negotiated projects, bringing a standard process that would also benefit investors. The clearinghouse would further move REDD+ to a pro-poor, inclusionary system. It would catalyze the transition from the current experimental mode to more predictable and institutionalized transactions—at the jurisdictional level at first, and perhaps over time to national, regional, and international levels of clearinghouses.

When the best interests of indigenous people and smallholders are finally institutionalized, the potential of REDD+ will be better fulfilled.