Awareness of our changing climate has steadily grown over the past decade, but its impacts are viewed as intermittent and fleeting: a big flood or the doubling of the price of rice. News reports and climate change studies suggest widespread threats to our health and socioeconomic wellbeing, but often fail to explain how to adapt to the nuances of a shifting climate.

Armed with only a list of climate change threats and uncertainties, leaders—in communities, in government, or in executive offices—base on-the-ground decisions on the past and present, as they always have, coping with change when it arrives. The Mekong Adaptation and Resilience to Climate Change (ARCC) program—encompassing Thailand, Cambodia, Lao People’s Democratic Republic, and Vietnam—works to bridge this gap between climate science and local decision making.

A recent climate study undertaken by the Mekong ARCC project finds that the Mekong Basin will see more extremes: wetter wet seasons, drier dry seasons, higher average temperatures. Some parts of the basin could experience an average annual temperature increase of 4°–6° Celsius. In places like the eastern plains of Cambodia, that means the maximum daily average temperature could rise from 38°C to 42°C, leading to increased heat and water stress on rice and rubber crops at the end of the dry season. The same trend—wetter and hotter—means shifting suitability for crops, making northern Lao better for growing rubber, cassava, and robusta coffee, for example. 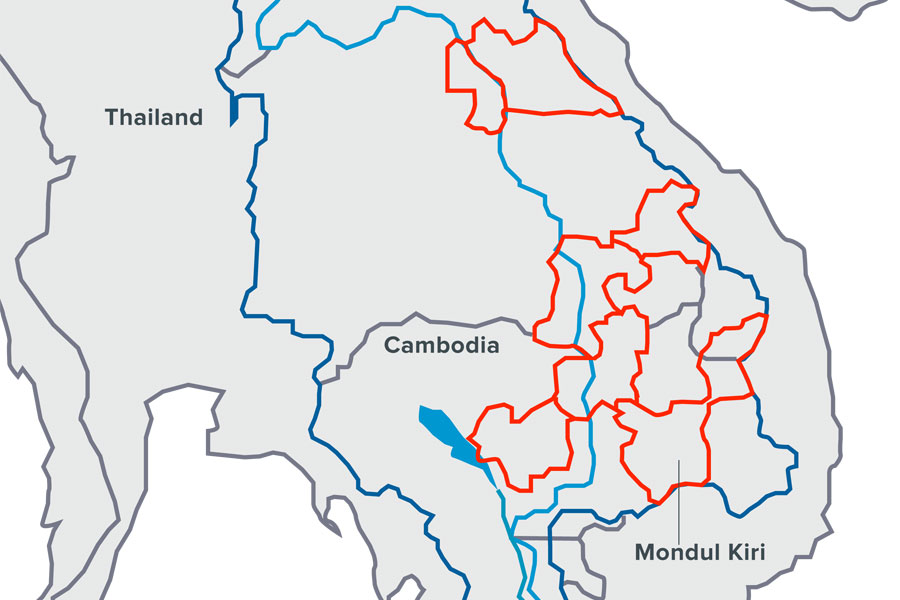 Climate studies provide informed projections of the future, but the question remains: How do we translate science-based scenarios into practical adaptation actions? To start with, decision makers must understand the subtleties of how wetter wet seasons or more days at higher temperatures will directly affect the fortunes of their community, business, or local government. Importantly, they must also be able to monitor and measure changes as they occur. The Mekong ARCC project, a U.S. Agency for International Development (USAID) initiative, has introduced the concepts of “comfort zones” and “threshold markers” to aid decision makers in analyzing their own distinct vulnerabilities and monitor the changes around them. The yearlong study, conducted by international and national scientists, reveals four principal messages on how leaders can incorporate science into decision making. 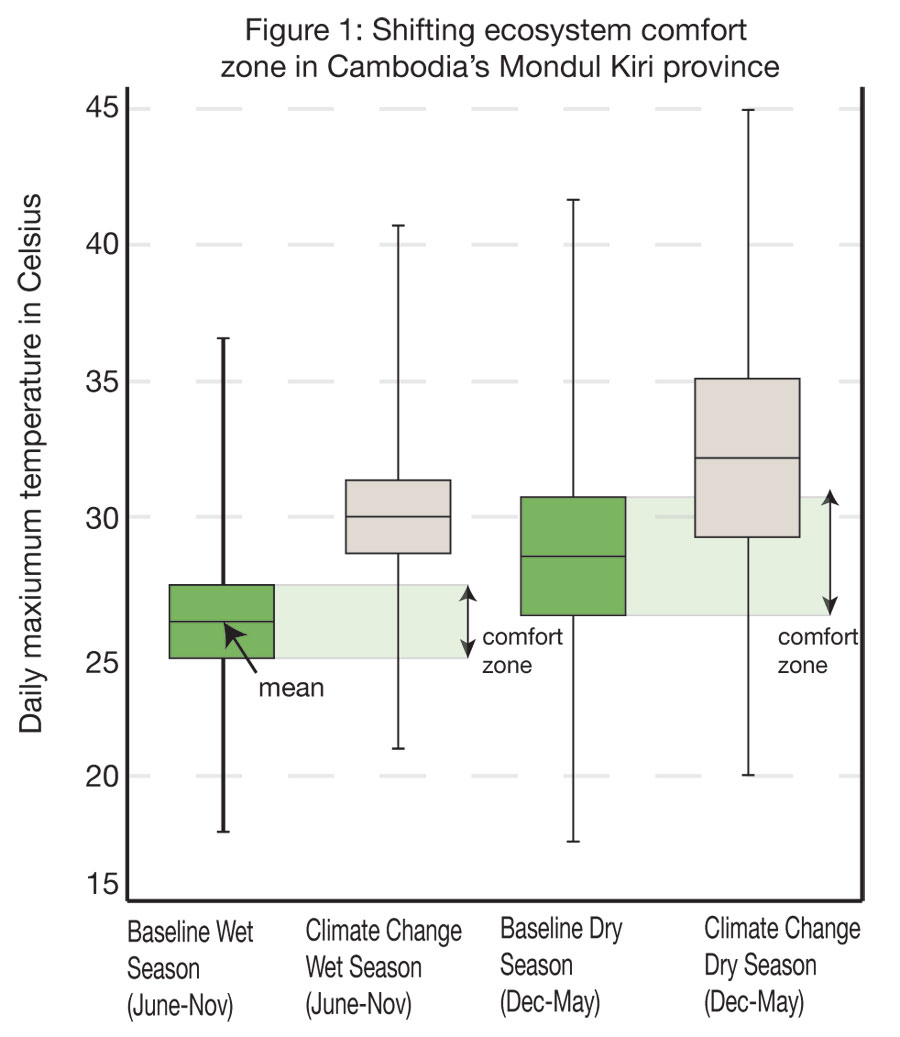 All livestock and natural species thrive in specific thermoneutral zones; crops are most productive in a comfort zone where temperature, rainfall, and soil conditions create a favorable growing environment. When these conditions change, the crops or animals struggle or fail. A slightly warmer 2009 winter season—when Litchi trees flower—in Thailand’s Chiang Rai province drastically lowered Litchi fruit productivity, with yields down 50 percent. Facing conditions beyond the range of its traditional comfort zone will not mean the immediate collapse of a crop or natural system, but it does mean a decrease in its vibrancy and productivity. The study shows how these comfort zones will shift, rendering unsuitable places once thought ideal for certain crops, like the Central Highlands of Vietnam for coffee, or Cambodia’s Mondul Kiri province for rice. Projected shifts outside of these comfort zones mean variable impacts on different key crops and species, such as:

Natural systems and crops have tipping points after which they are more likely to fail. With increasing temperatures, rainfall, and dry periods, identifying threshold markers for specific crops, livestock, and fisheries will indicate when a comfort zone has been breached and give leaders their cues to be proactive in mitigating the consequences.

Developing plausible stories of how the future might unfold is a powerful tool for decision makers. Historical weather trends do matter, but adding projections on climatic comfort zones and threshold markers in scenario planning exercises can improve decision making around issues such as farming systems, land use planning, supply chain management, and population migration.

It is one thing to offer stakeholders generic warnings about the threats of climate change; it is quite another to cite a credible projection that heat stress and rainfall changes will destroy fisheries and shrimp production in Vietnam—and it is far more likely that governments, businesses, and communities will mobilize to respond and to minimize the systemic impacts.

Traditional farming approaches and natural systems serve as buffers to a changing climate. Integrated farming systems—tree crops intermixed with vegetables and staples, or ducks and fish alongside rice cultivation—increase farmer resilience and can help protect ecosystems. As the harmonies between human and natural systems fade away with the increase of commercial farming, so too does an important element of local resilience.

The Mekong ARCC team undertook a two-step study to estimate how climate change may affect national and local economies and ecosystems in the Lower Mekong Basin.

The first step identified those areas that are projected to see the greatest changes in temperature and rainfall as a result of climate change and mapped provinces against the principal ecosystems in the basin. The climate projections were developed by the International Center for Environmental Management (ICEM), based in Hanoi; used an emission scenario known as A1B; and averaged results from six Global Circulation Models that most accurately replicate historical temperature and rainfall data from 1980–2005 to create the 2030 and 2050 projections.

The Lower Mekong Basin includes part or all of four countries – Lao, Vietnam, Cambodia, and Thailand. The basin covers approximately 608,400 square kilometers and is home to more than 60 million people, of whom approximately 75 percent earn their livings from agriculture and fisheries. Besides being the world’s rice bowl, the basin also has the world’s largest inland fishery, producing up to 2.6 million tons of wild fish and other aquatic resources each year—worth at least US$2 billion annually.

Based on ICEM’s analysis of climate trends, the Mekong ARCC team identified 11 provinces (as shown in the map above) that are projected to experience some of the greatest changes in temperature and rainfall patterns.

In deriving these more detailed impact projections, the team applied a concept of ecosystem comfort zones as defined by the range of precipitation and temperature around the wet/dry season means that was experienced 50 percent of the time over the baseline period (1980–2005). The underlying premise is that crops, livestock, fisheries, and natural systems that predominate in each area are in their “comfort zone” and can thrive in the local temperature and rainfall conditions of that particular area. The team of scientists then projected how these comfort zones would shift by 2050. Figure 1 shows results for Mondul Kiri province in Cambodia. 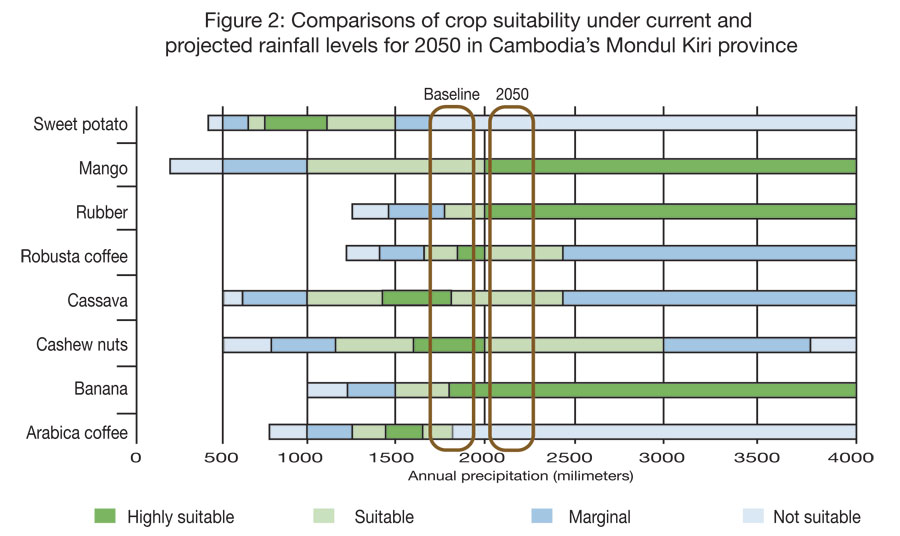 These temperatures and rainfall regimes, combined with soil conditions, are what determine whether an environment is favorable for certain crops, livestock, and fisheries. As Figure 1 shows, projected higher daily average temperatures during Mondul Kiri’s dry and wet seasons push the ecosystem beyond its traditional comfort zones, which will harm the health and productivity of local, natural, and agricultural systems.

Applying this information, the scientists looked at how these changes would affect crops, livestock, fisheries, and natural systems in each “hot spot province.” For crops, the teams adapted the Land Suitability Evaluation Tool developed by the International Rice Research Institute and combined this with ICEM’s Integrated Water Resources Management model to estimate how future changes in climate (temperature, rainfall, water availability) along with topographical characteristics (soil type and slope) will affect growing conditions for important crops in each province. Figure 2 shows how shifts in rainfall patterns will alter the suitability for selected crops in Mondul Kiri.

More Than Just An Emotional Issue

Interconnected crop and species systems throughout the Lower Mekong Basin will be affected differently, as will every business and community. The layered subtleties of how climate change directly affects people will be amplified by nonclimate drivers of change—dams, deforestation, land conversion for industrial monocultures, and population growth will continually rebalance the landscape and should not be disentangled from adaptation planning.

The Mekong ARCC Climate Study demonstrates that climate change is more than an environmental issue. Developing a coordinated adaptation response to climate change in the Lower Mekong Basin is indeed a formidable challenge, given the uncertainties and many moving pieces. But this study offers decision makers a framework to incorporate science in practical and innovative ways, building resilience into lives and livelihoods across the basin.

Beginning in late 2013, the team will apply these decision support frameworks with communities, further testing how best to apply science-based scenario planning in the field.