Biogas projects in Africa have a worthy goal—to cheaply convert waste into fuel—but a discouraging record of failure. Reliable biogas operations require specific conditions and careful maintenance. So when Alvaro Gutierrez from Colombia set out to launch a biogas program in Kenya, he reached out for advice and found it, for free, from colleagues all over the world.

Gutierrez and many others acquire valuable, usable knowledge on natural resource management from the FRAMEweb.org social media site. Under the Capitalizing Knowledge, Connecting Communities (CK2C) project, the website has grown to 2,500 active members, mostly from developing countries. The original FRAMEWeb was launched in the early 2000s as a follow-on to meetings in Africa, and went live in 2003 as a place to access reports and reconnect with colleagues. DAI took over management of the platform in 2007. 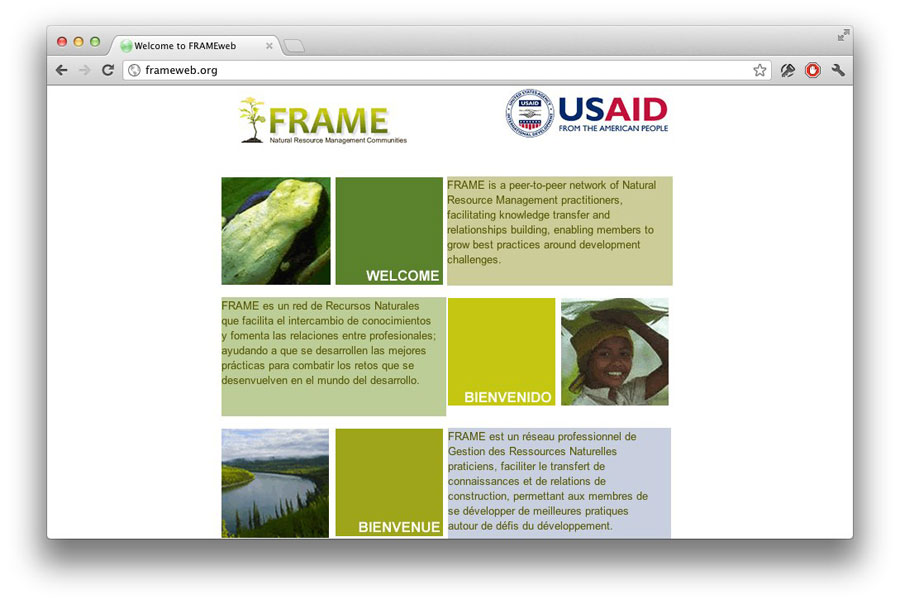 Most of the give and take has occurred between developing countries. Gutierrez, for example, took advantage of insights shared by people in Kenya, Mauritania, Mozambique, Rwanda, and Tanzania. But he also heard from practitioners in Bolivia, the eastern Himalayas, the Dominican Republic, and Honduras.

In a discussion on climate change adaptation, to take another example, Elvis Nfor Tangem of Tree Aid in Burkina Faso took the time to discuss positive changes in his country, which in turn attracted contributions by M. Rahman of Singapore, who noted how his experiences in Bangladesh demonstrate that growing awareness of—and improved incentives for—environment-friendly processes yield better environmental results that prohibitions and fines alone.

“I will go for the idea that lets the people who suffer most from it lead the change,” Tangem wrote. “The change should be demand driven. Many times the world does not give those in vulnerable communities or situations the time to digest their situation and propose the solution.”

Captivated by the apparent connection between conservation and religious faith, environmental consultant Amy Gambrill recently wrote a white paper for USAID on the topic. After airing an inquiry on FRAMEWeb, Gambrill received responses from eight countries on four continents describing how people all over the world are leveraging faith to implement sound conservation, inspiring her to develop the subject further.

Natural disasters, climate-related issues, changing ecosystems, and food security affect people globally. Visitors to FRAMEWeb learn across boundaries of politics, ethnicity, and donor funding, which is critical for the natural resource sector given its rapidly changing relationship with human development.

Transcending the time and travel constraints of face-to-face conferences and workshops, topic-specific information lives indefinitely in FRAMEWeb for use at any time. Recently, an older discussion on re-greening the Sahel sparked debate around farmer-managed natural regeneration, with participants from the region sharing videos and experiences.

FRAMEWeb was born as a collection of communities of practice. Group members often knew each other and used the site to share documents. Members now join organically after finding information from a web search, and they go on to create their own profiles and join the conversation.

When creating an account on FRAMEWeb, members list their organization, country, languages, interest, and expertise. The 2,500 current members represent environment and energy ministries, donor agencies and banks, nongovernmental and community-based organizations, universities, media, and the private sector. They come from 120 countries and include speakers representing nearly 100 languages. (The FRAMEWeb site supports English, French, and Spanish). While members from many developing countries have submitted questions and answers to the discussion space, many more are contributing success stories, websites, and videos, and mapping their activities via the FRAMEweb geospatial tool, GeoExplorer. Some members and discussions originate in the United States but seek to incorporate participation from the global south. Recently, a rich discussion on property rights, REDD (Reducing Emissions from Deforestation and Degradation), and poverty reduction followed a seminar in Washington, D.C. After the seminar posted a video and question, FRAMEWeb members from Zambia, Malawi, the United States, and the United Kingdom engaged in the discussion. A related case study from Cambodia was posted for review, including a link to the activity via GeoExplorer.

At DAI, we are thrilled that FRAMEweb has become a robust and easily accessible engine for south-south collaboration that is helping southern practitioners become more self-reliant. As a member from Cambodia noted on the faith and conservation discussion, “I wasn’t specifically searching for information on this topic, but the posts are interesting, particularly the fact that this approach is used widely in many different contexts. I’ve forwarded this to a friend at the Alliance for Religions and Conservation to make sure she is connected.”