Jordan needs to grow its economy. More than 700,000 of its young people—39 percent of the available labor force ages 15 to 24—are without a job. Many have good educations and are holding out for high-quality employment. Jordan is also hosting an enormous influx of Syrian refugees, which has helped swell its population from 7.5 million in 2011 to 10 million today. Many of these newcomers are also seeking work. But Jordan is almost completely reliant on imported oil and gas for its energy, limiting its ability to grow the economy and create jobs.

In 2014, the Jordan Competitiveness Program (JCP) analyzed Jordan’s energy potential as part of the U.S. Agency for International Development’s support for the Kingdom. The analysis found that improving energy self-sufficiency alone could create 13,300 jobs in Jordan—4,200 in centralized renewable energy such as wind- and solar-power farms, 3,900 in decentralized (local) renewable energy generation, and 5,200 in supporting efficient energy use through insulation, better windows and lighting, and improved systems and machinery. Creating these renewable energy sources is projected to save the country 3.1 million barrels annually in imported oil. The analysis also documented a 25 percent average annual increase in demand for engineers and technicians to design, install, and maintain solar- and wind-powered systems.

The JCP team has since assisted Jordan in putting these recommendations to work. Today, Jordan is leading the Middle East and North Africa in renewable energy growth according to Bloomberg New Energy Finance, and is ranked third out of 71 countries worldwide. 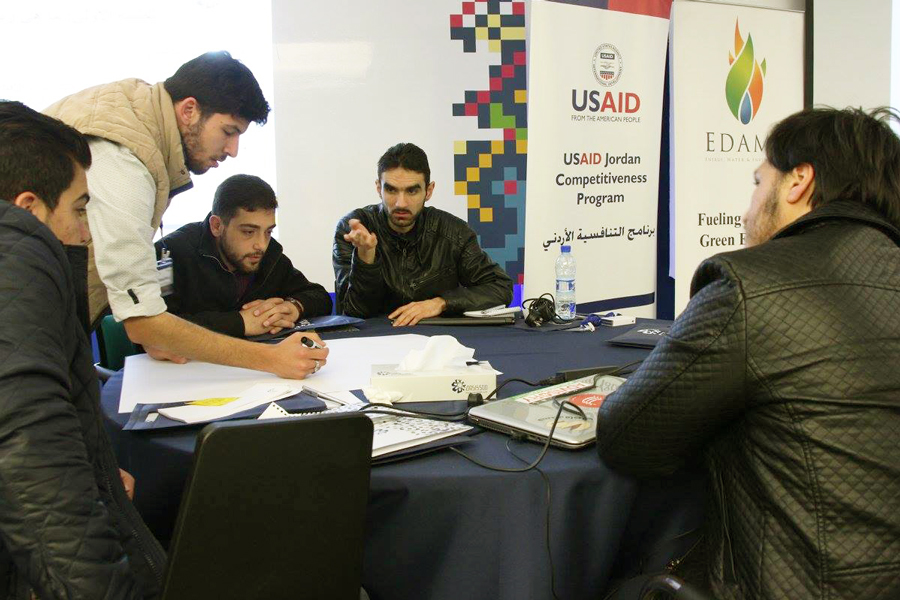 Clean Tech Emerges as an Opportunity

Jordan possesses scant natural resources. As a result, it imports 96 percent of its oil and gas. While this makes the country’s economy highly vulnerable to market and geopolitical forces, Jordan is blessed with one of the world’s highest solar irradiance levels—necessary for producing solar energy at scale. Jordan also has substantial potential in hilly areas for wind-generated power.

To assist Jordan down this path, the JCP team, which began its work in 2013, has helped mobilize US$3.2 million in private sector and government spending for solar panels and associated needs such as metering. JCP has helped 18 factories conduct detailed energy audits, which produced the information they required to finance energy efficiency upgrades, using loans made through institutions such as Jordan Ahli Bank, where JCP trained loan officers on the responsible financing of clean-tech projects, which takes into account energy savings and other factors. JCP also supported the Wasateia Municipality and Irbid Speciality hospitals as they made solar-energy investments that have now achieved financial closure.

The energy audits that made these and other financing transactions possible were conducted through Jordan’s Energy and Environmental Sustainability (EES) unit that was established with JCP support. 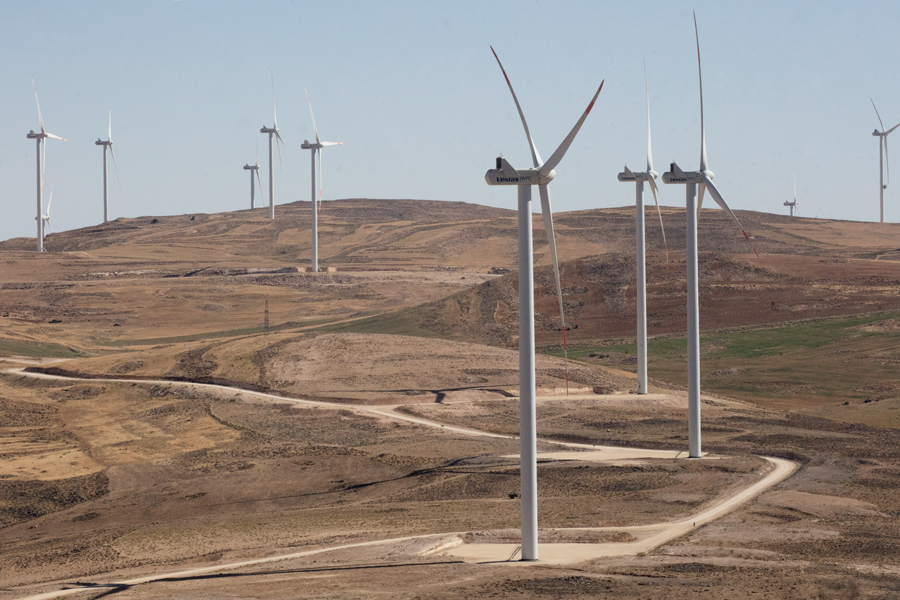 The Tafila Wind Farm was built with International Finance Corporation support and inaugurated by the Kingdom of Jordan in 2015. It produces enough energy to power 80,000 homes. Photo: Dominic Chavez/IFC.

To meet Jordan’s increasing demand for renewable energy engineers, JCP partnered with EDAMA, a Jordanian business association, to launch energy training courses certified by the Association of Energy Engineers. This initiative helped certify more than 200 Jordanian professionals through programs such as the Renewable Energy Professional curriculum. Notably, JCP sponsored two waves of female engineers to acquire the international certification—64 women in all—in sought-after courses such as Certified Energy Manager, the world’s most recognized energy certification. These certifications have improved young Jordanians’ chances for getting hired in this growing sector, and their certifications are expected to help employers compete for international and regional contracts. Strengthening Jordan’s clean energy workforce has helped improve the country’s reputation as an investment destination for cleantech projects. 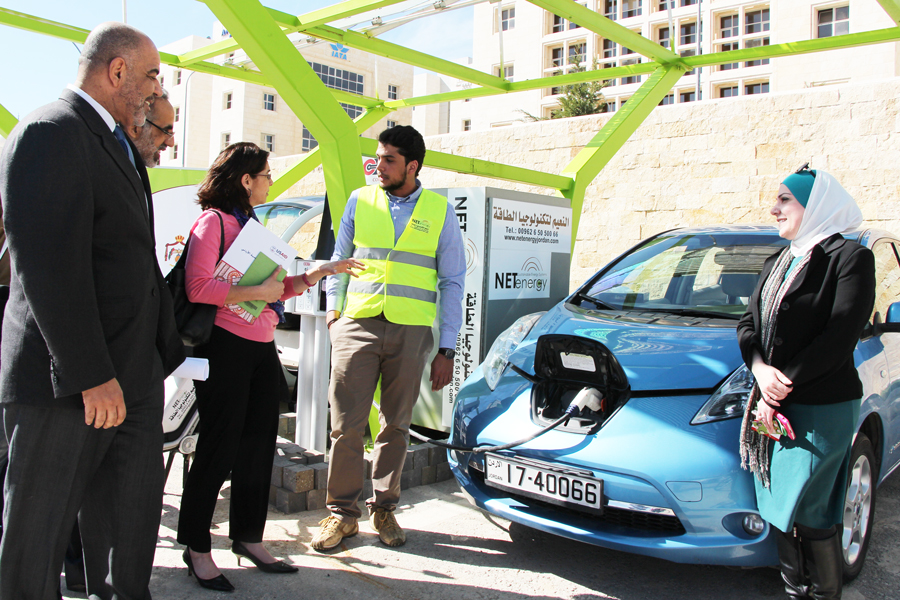 Pioneering Use of Electric Vehicles

Access to energy—and thus electricity—can dramatically improve people’s lives. Being able to turn on a reading lamp, for example, light up a town center, or power up enterprises small and large. While some of DAI’s work specifically addresses energy—notably our work in energy finance and reducing emissions—all developing countries can benefit from better energy availability and more efficient use, including in sectors such as farming and agribusiness, water and sanitation, health, and, in Jordan’s case, job creation, post-conflict transition, and refugee integration. 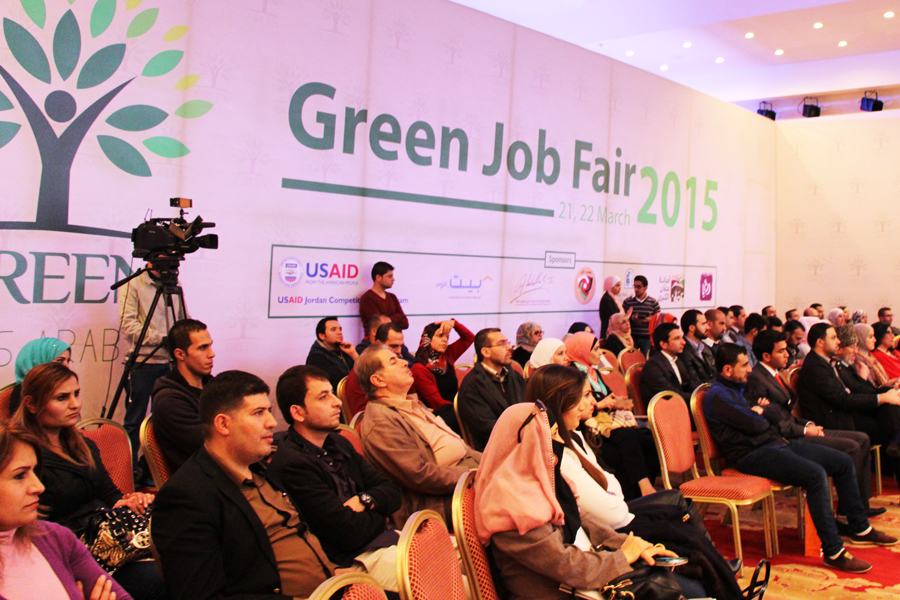 Green Job Fair at the Landmark Hotel linked companies that work in the green technology sector with professionals and graduates who have relevant skills. Photo: USAID Jordan JCP.

In addition to its own unemployed, Jordan since 2011 has seen 1.4 million refugees cross its border from neighboring Syria. Half are registered and living mostly in encampments, while the other half have been absorbed by Jordan’s cities and communities. While this influx has strained Jordan’s resources, the country has been working with international donors and investors to recast this situation into an economic development opportunity. To do so, the Jordan Compact was created to support the Jordanian private sector in industries such as garment manufacture, plastics, and agriculture.

As part of its assistance to the Compact, DAI identified these sectors of potential competitive advantage and the barriers—including legal, policy, and regulatory—to developing them, one of which is the availability of energy. Jordan has fully embraced its need to develop its clean energy sector and take the journey to energy self-reliance. We believe the country will eventually achieve its clean-energy potential. And in time, it may even be able to export solar- and wind-powered electricity to neighbors in need such as Lebanon, Palestine, and Syria.